Eastern Nevada Indians hunted Mormon crickets at certain times, getting huge returns of meat for their time. American Indians all ate grasshoppers, crickets, and katydids in large numbers, and had many different methods of hunting them. The Mormon cricket is a large member of the katydid family found in the US Southwest. 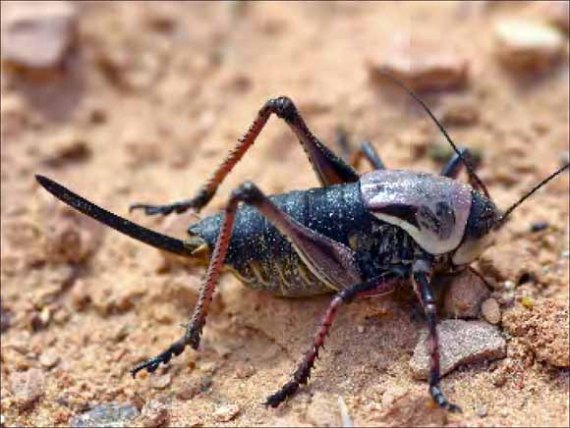 Here was an interesting method used for capturing them:

On flat lands below foothills, quite a number of trenches were dug measuring a foot wide, a foot deep, and about 30-40 feet long, shaped like a new crescent moon with the horns facing uphill. The trenches were in a row, with ends joined or very close. The trenches were covered with a thin layer of stiff wheat grass straw.

At the hottest part of the day, the Indians divided into two parties, each going to one end of the trenches, and lined up single file uphill towards the foothills. Each individual was armed with a bunch of grass, which they swung back and forth as the line advanced toward the trenches (the description of the exact positioning is vague, but I’m assuming the Indians advanced from uphill, going diagonally, with one end of each line near the end of the trenches, and the other near the foothills but still far from the other party, and as they advanced, they covered all the space between them), driving the crickets [Anabrus simplex (Orthoptera: Tettigoniidae)] towards the trenches, leaving few behind, and creating a thick black tumbling mass of crickets before the drivers.

The crickets, when disturbed, can jump about one foot down hill, but only half a foot uphill, so will always go downhill to escape if possible. The Indians were exploiting this behavior.

The trenches were over half full of crickets, and only about one out of a thousand passed by the trenches without entering. The crickets are dried and ground whole on the same mill used for pine nuts and grass seeds, making a fine flour that will keep a long time if kept dry. A bread or cake is made with them, or the cricket flour is added to pine nut or grass meal to make a bread, making it sweeter.

living on the (water's) edge

We use scientific studies and observation to explain why native plant “restorations” are rarely successful.