Stinging nettles (genus Urtica) are widespread in Northern Hemisphere temperate regions and are all edible. Urtica is simple to ID; just touch it and if you immediately feel a burning, it’s a nettle! (Ur = burn in Latin, and urtica = nettle in Latin). The burning sensation tapers off in severity after a few minutes, but its after-effects (particularly felt when the afflicted part is put under hot water, or subjected to heat) can last up to a whole day. The chemical is formic acid (the same chemical in ant stings), which is injected by tiny hollow hairs covering all the aboveground plant parts.

If you don’t want to touch it, just look closely for densely packed hairs on the leaves, which become larger and more sparse on the stems, almost appearing like spines. But that’s not a fail-safe ID method unless you have otherwise familiarized yourself with its appearance.

The common species in California and the Pacific Northwest is Urtica dioica. The California Indians used this plant for food, usually cooking it first, but sometimes eating it raw! It won’t kill you to eat it raw, but it will hurt a lot. They also rubbed the fresh plant on areas afflicted with rheumatism to give relief (or maybe just distraction?!). During rites of passage to adulthood for young males, after being covered with large stinging ants for a while, the ants were brushed off with freshly-picked nettles! Double ouch!

Heating destroys the formic acid and renders it safe to eat without burning. To prepare nettles, remove the stems, boil a pot a water, put the leaves in the boiling water for 2-4 minutes (I prefer more like one minute; that’s all you need to kill the burn and leaves it with a leafy texture and taste). Either scoop out the nettles, or drain, but be sure to save the broth which is very tasty and healthy as a tea or built up into a soup. To protect your hands while collecting and preparing nettles, use a pair of leather gloves. 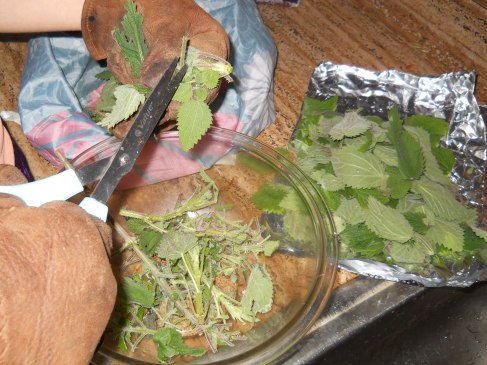 Then use as greens much like one would use spinach (though nettle tastes better). You can make a mean pesto or pizza topping, or just eat them plain.

Nettles are way more nutritious than spinach, and are marketed as a super health food. They are just chocked full of vitamins, minerals, and macronutrients. Plus they are easy to ID, abundant where they are found, and not eaten by many wild animals. You may also get a little rush from eating something that could otherwise hurt you, kind of like rattlesnake or bear meat.

living on the (water's) edge

Death of a Million Trees